How To Use A Digital Multimeter 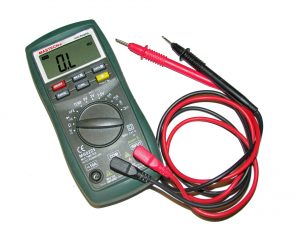 What is a Multimeter?

A multimeter is a meter that is used for testing the measurement of voltage, currents and resistances. In addition it is used to measure at least several different measurements that are all supplied into one unit. This is mainly done by two probes that are connected to the multimeter. The main feature of a multimeter is to measure voltage, you can also use it for checking continuity of wires and fuses.

What does a multimeter do?

To understand what a multimeter is and how it is used, we must first learn the basic functionality of the meter. For the most basic circuit we need it to be connected to a voltage source. The voltage source could be as simple as a battery. In the diagram below it displays the voltage source being V creates pressure from electricity which then focuses the currents to be released. The run from R which is the Resistance, which determines how much resistance flows through a circuit.

What can a multimeter measure?

The multimeter functionality is capable of many different readings dependent on the meter. The most basic meters measure resistance, amperage, and voltage. It can also be used to test the continuity to see if the circuit is complete. Some meters can test some of the following:

The meter usually has three or more ports, two probes, a black one and red one. The red probe can be plugged into any port depending on what is required. Where as the black probe plugs into the basic port or the common port. After having the probes plugged the user should turn the knob which is located in the centre. From here the user can select which function they want to use for a certain test they intend to do. 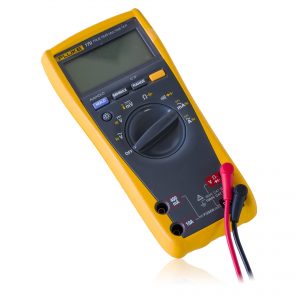 Each probe is used to take a reading with its bare metal point which should be then connected to wires or the terminal to start the testing. Any indication of the testing will be read out from the testing to the user. Multimeters can only be used if it does not exceed the maximum voltage rating of the particular tester. A multimeter should be used under precaution, do not touch any bare ends of the probe during a test where it is energized.

Again if you are unfamiliar with using a multimeter it is recommended to get some basic hands on training to understand how to use it properly, especially if handled wrong the user could get an electrical shock if user is working with live circuits.